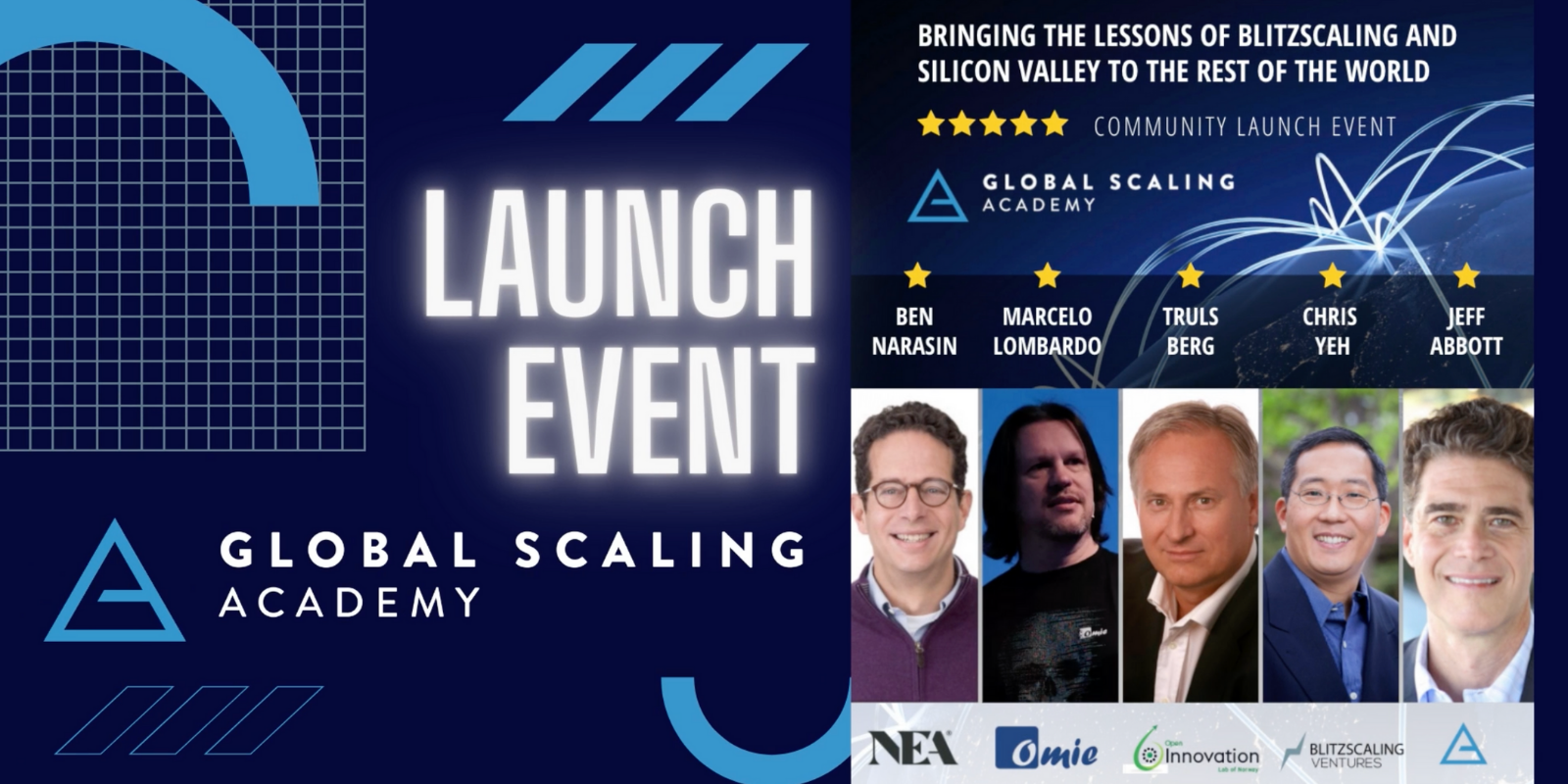 Global Scaling Community has launched with a grand opening, prizing its launch with an all-star panel representing the diverse global membership of the community. The scheduled event included:

“THE FOUNDER” → Sean Hinton, the CEO of Skyhive.io answering “How are the attitudes and techniques of scaling different between Canada and Silicon Valley?”

Skydive applies artificial intelligence to rapid re-skilling of organizations in communities, actively serving four continents as one of the fastest growing companies in Canada. They primarily work with fortune 500 and global 2000 organizations, as well as government entities.

“THE ENTREPRENEUR” → Marcelo Lombardo, CEO of Omie answering “How did raising your Series B from Silicon Valley investors impact Omie?”

Omie is the number one cloud based management platform for small and mid sized companies in Brazil. They bring together ERP, software, entrepreneurial education and financial services in an easy to use environment. They serve a $6 billion market in Brazil and have since worked with 17 million local companies.

“THE INVESTOR” → Ben Narasin, Venture Partner at NEA answering “Why do you give so much to the community, and why should entrepreneurs seek out investors who do so?”

He started off as a seed investor and then became a general partner of a small venture firm. He currently serves as a venture partner at NEA, the largest venture firm in the world with about 27 billion of capital under management, currently investing out of fund 17, which is a $3.6 billion fund.

“THE CORPORATE INNOVATOR” → Truls Berg, CEO of Open Innovation Lab Norway and Chairman of Norwegian Business Angels answering “What do established companies need to learn from founders and investors?”

Truls has started 12 companies and considers himself an agent for change and a great believer that we are smarter together than on your own.

“THE LEADER” → Jeff Abbott, Co-founder of GSA answering “Why did you believe an online community was needed for founders, corporate innovators and investors?”

Acts as the co-founder at GSA and worked as an entrepreneur, and a digital transformation leader inside a corporation in the past. He is also an investor as well as an educator running an accelerator who has experienced the challenges of scaling from many sides. He is excited to initiate conversations around scaling that hopefully brings results to people in their scaling and innovation challenges around the world.

Tune in to our video; or, if you missed the event, follow along on our blog to learn more about the highlights from the panel.

What is the Global Scaling Academy community?

The Global Scaling Academy community was formed with the goal to provide a place where everyone can come together, whether they are entrepreneurs, corporate innovators, or investors, to work on the issues of scale. As our co-founder Chris Yeh expertly puts it “While it's very important to start companies, it's even more important to scale them.”

In this respect, our esteemed panel had very important insights on the issue, bringing in perspectives, not just from the classical Silicon Valley, but also from the different ecosystems around the world.

Significant Insights from the Panel

What Sean Had to Say:

Attitudes and techniques of scaling are different in Silicon Valley than back in Canada in terms of “breaking the bottle”, access to networks and growing your team. In terms of breaking the bottle in Canada, people are relatively conservative as it relates to innovation, big ideas, and putting ourselves on the global stage.

When a Canadian entrepreneur is asked, who their competitor is, they'll say, Joe from around the street is their competitor. A Silicon Valley startup will name Microsoft…

That's one of the things we try to do with the GSA community: bringing people together so that you can benefit from that breaking the bottle mindset, and connecting with the networks that have that.

Given this pandemic, this is the perfect time to bring people onto your team from different parts of the world for different perspectives. Everyone is working virtually anyways in most countries.

What Marcelo had to say:

Three things first from the founder perspective, when you're scaling up your company, you're actually running a completely different company every year, sometimes every six months. There is no single product playbook that can take us across all the growth stages. So as we need different playbooks, we also need the different people, different governance, and also different investors. It's in the founder's job description to recruit investors.

We must pick investors that see the world from similar perspectives and understand our growth ideas.

A company can grow so quickly as it goes through orders of magnitude of size increase, that it dramatically changes the processes and the various programs that you might be running. So you have to constantly reinvent yourself, and potentially look at Silicon Valley to bring in investors, as iron sharpens, iron. You could just compete with the local startups, but you want to compete with the rest of the world.