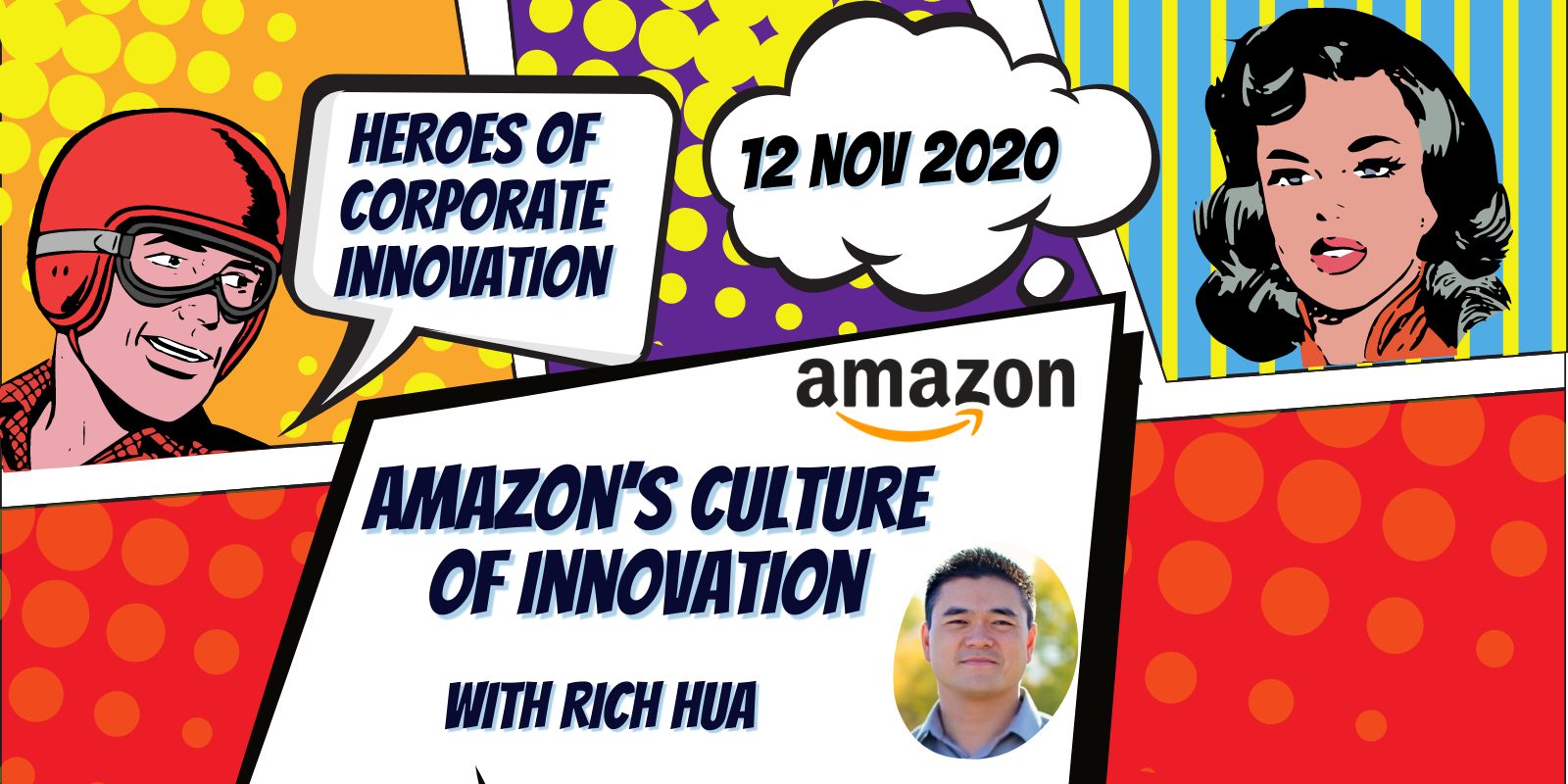 Welcome to “The Heroes of Corporate Innovation”, GSA's monthly event and podcast series where GSA hosts Chris Yeh and Jeff Abbott feature a GSA Community member who is an "everyday innovation hero" making a real difference driving innovation within their organization. Our first episode revolved around the secrets of Amazon's Culture of Innovation, and how to adapt them to your organization, with Rich Hua. Rich is a Global Technology Strategist at AWSm, and Expert in the GSA Community, who has trained more than 20,000 Amazon employees. Rich has presented to over 20,000 people in the last few years and is well-known in Amazon as the go-to guy to share this knowledge. With his presentation Rich attempted to pull back the covers and give the audience an internal glimpse into the world of Amazon.

Many people ask: how does Amazon do it? How did it start and how does it continue to innovate as it's gotten to over a million employees? Amazon began with really humble beginnings: a little online bookstore with lots and lots of books. Since then, it has innovated a lot in e-commerce and went into some related segments, such as music, videos and, even diapers. With a critical acceleration, Amazon started taking problems and solving them for the masses. AWS is a great example of that: taking data centers, which are very rare and complicated, and then pushing them to the edge so that anybody could use the same technology that was relegated only to multi-billion dollar budgets in the past. You could be a person in your garage spending a hundred bucks a month and leverage the exact same tools today. So it's powerful because it makes these things ubiquitous and then speeds innovation.

So for Amazon, innovation begins with this idea and mission: to be the Earth's most customer centric company. Although it's a very broad mission it drives Amazon to innovate on their customers' behalf. So innovation starts with the customer. As the founder Jeff Bezos puts it: “There are many advantages to a customer centric approach, but here's the really big one. Customers are always beautifully, wonderfully dissatisfied.  Even when they don't know it yet, customers want something better. And your desire to delight customers will drive you to invent on their behalf. You might relate to this! If you are an uncle or an aunt or a parent, and you give the little one something that they really wanted for Christmas; how many of them are really super satisfied when it comes to March or April of next year? Very few of them. And that's human nature!

This is actually what drives innovation. If you're focused on your competitors, and they're not innovating you actually have no motivation to continue to innovate. In Amazon’s case, no one actually came to Amazon and said, “Hey, create a prime membership program.” But it really turns out they wanted it. So, Amazon doesn’t just build technology for technology's sake. It naturally comes out of placing the customer in the center of the innovation.

Since its foundation in 1994, Amazon has scaled into this globally massive e-commerce business; something that had not been done before. It learned so much from the process that they wanted to offer their expertise as a cloud service to make it easier for other businesses to scale as well. AWS started in 2006, with an unusual seven-year head start in the cloud business; that's why AWS has the greatest breadth and depth of security, performance, and scalability. Because as Andy Jassy, the CEO says “there's no compression algorithm for experience”.

Rich explains their business model as a flywheel: “we try to provide the best selection possible, which provides a greater and better customer experience, which brings more traffic to the site, which in turn brings more sellers who want to sell on that platform. And then that creates more selection. And so this flywheel goes round and round faster and faster.” That is how business grows, and through the economies of scale, you can actually lower the cost structure, which in turn allows you to lower prices.

When Amazon first came around, no one thought the internet was really going to do anything. It was scary for people. So, Jeff Bezos started out with explaining to people what the internet was.  Since then, they were ambitious to preserve their day-one strategies.

When it comes to the pillars of innovation for Amazon, there are four things that really make a big difference. If you can think of them as the four legs on a table that holds it up:

Do you know about Amazon’s 14 leadership principles? When they hire people, they look for the following qualities:

At Amazon, these principles are built into the culture and into the DNA of the company.

For more information on Amazon’s culture of innovation, follow the full podcast here!