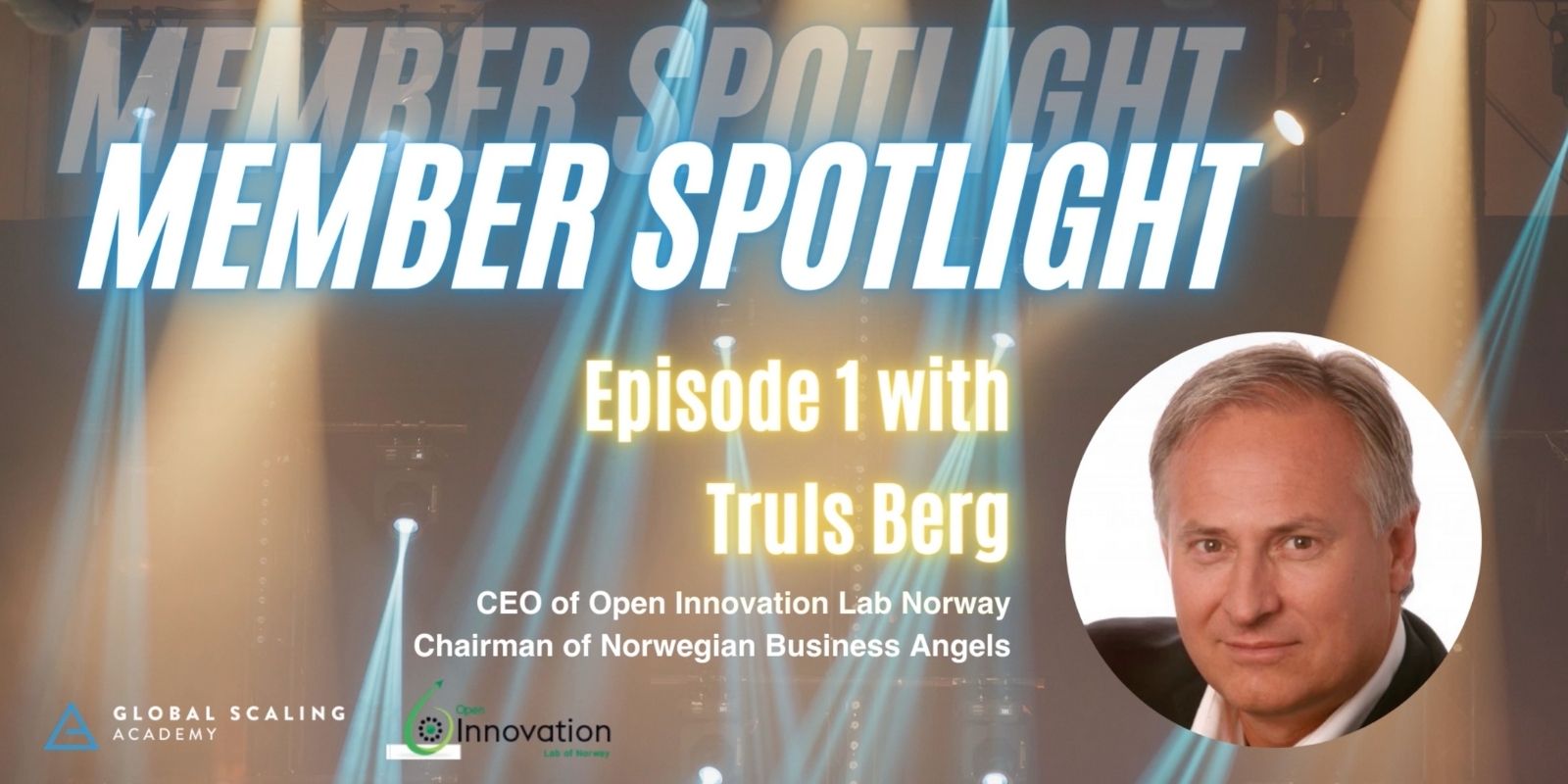 Greetings to the GSA community. We are excited to announce the launch of our member spotlight series. In the coming weeks, you will be seeing videos featuring our very own entrepreneurs, thought leaders, investors, and corporate innovators. We thought this would be the ultimate way to make our virtual community feel more familiar and closer to home. This is your chance to get to know your fellow community members, learn from their expertise, and make valuable connections.

Without further ado, let’s get to know our first guest: Truls Berg, CEO of Open Innovation Lab Norway, and the chairman of Norwegian Business Angels. In the beginning of our conversation, we played a mini game with Truls where he had a minute to introduce himself while I timed him. In that minute he was able to tell me that:

Truls mentions that this was a truly enervating and, yet, humbling experience as it made it easier for him to take the leap and start companies in his career. He has started 12 companies in his lifetime, one going public, and hired thousands of people. Having discovered he had the potential to sail around the world and make his dream come true, starting companies and working to make them successful didn’t seem as big a feat.

So, Truls is not only a serial entrepreneur; he is also a serial risk taker. In professional life, he has always tried to minimize the risk. But, as he puts it, “when you jump on the sailboat, it's not because you want to stay in the harbor. You want to take it to a new coastline.You want to go to new places.” That takes courage and risk taking.

Next, we dove into Truls’ personality as an entrepreneur and his entrepreneurial journey. He mentioned that it has been a long ride in which with every company he started, he thought it would be the last one. Most of these companies were focused on making sense of the ocean of data there is out there, working on business intelligence, big data and search. In the meantime, he has magically found the time to write two books and has recently sent the third to a publisher just a few days ago. He says the books have to do with making sense of opportunities early on, before they become problems. His philosophy is that opting for change early on creates big opportunities. Waiting too long, creates problems that can turn into major threats; while acting early creates solutions.

Our final point was about Truls’ expectations from the GSA community. He says he is a big believer in being smarter as a collective rather than an individual and cherishes teamwork above all else. He is also a big fan of Reid Hoffman, Chris Yeh and has appreciated their teachings in the Blitzscaling book. Having done it so many times himself, he understands the challenges that come with scaling. In his own words “When you grow to a certain level, you hit this ceiling and have to get past it in order to keep growing. And when you reach 20 people, you hit this other ceiling and you have to go through that as well”. These ceilings don’t end there. You come across them as you pass 45 people, and 50… Truls thinks it's important to look at this process from a Blitzscaling perspective. “We have a lot of very, very competent innovators in Norway, but they're not so great at scaling by themselves” he says.

Scaling is a team sport. Innovation is a team sport as well. Truls feels that GSA understands that and is, hence, putting together an all star team across the world. He was also grateful for the member spotlights that will serve as an important opportunity to help the community connect better.